At last there is finally an ATM EMV liability shift in the USA!

The MasterCard EMV liability shift for Maestro debit cards at US ATMs is good news for the rest of the world, where card issuers have long had to put up with huge counterfeit fraud losses in the USA.  According to Europol around 80% of non-EU fraud against EU payment cards is committed in the US.  Criminals like cash, and ATMs that are not EMV compliant (i.e. perform transactions on magnetic stripes, rather than Chips) allow cash withdrawals on counterfeit EMV cards. 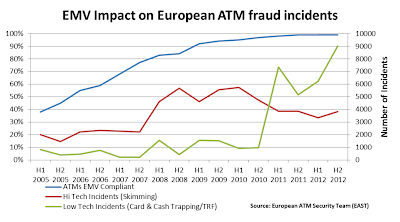 Europe has long led the world in fighting such fraudsters and US acquirers can benefit from the lessons learnt in Europe.  The non-profit European ATM Security Team (EAST) has just published a European ATM Crime Report which shows that, for the first time, European fraudsters are being driven away from card skimming to lower tech forms of crime at ATMs.  EAST represents ATM deployers and networks in 26 European states, as well as Canada, Russia and Ukraine.

EAST is holding its first global Financial Crime and Security (FCS)Forum in the Hague on 13-14 June 2013, and a key focus of the event is payment card fraud.  Experts from Europol and Eurojust are among an impressive line up of speakers.  This event has been put together by ATM users (deployers and networks) for ATM users.  In addition to European experts, speakers are coming from Canada, Latin America and Russia.  MasterCard will be speaking on “ATMs for Contactless Cards and NFC Mobile Acceptance”.  ATM acquirers wanting to learn from the European experience would be well-advised to attend.

The implementation of the EMV liability shift for Maestro ATM transactions means that, for the first time, card issuers from other parts of the world who have invested heavily into EMV, as well as into anti-fraud systems and solutions, will be able to chargeback losses to US ATM acquirers if their ATMs are not EMV compliant.  According to the European experience 'the devil will take the hindmost', in other words US ATM deployers that quickly invest in EMV upgrades will mitigate the risk of significant fraud chargebacks coming their way.  The fraudsters will no doubt quickly work out who the laggards in EMV implementation are, which will compound the problem.

Now the question is when will other schemes follow MasterCard's example?  Visa have published a US EMV liability shift deadline of 1st October 2015, but that is not for ATMs, only for point-of-sale (POS) terminals.  The clock is ticking...........