Only 28% of people surveyed protect their PIN at an ATM 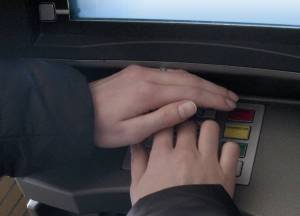 The Irish Payment Services Organisation (IPSO) has just released the results of a survey of 260 ATM users on the SafeCard website. The results were disappointing - only 28% of the cardholders (including 156 men and 104 women) actually make any effort to shield the PIN pad when keying in their PIN.

IPSO has released edited footage (see below) from a micro-camera recovered after criminals attempted to use skimming equipment at an ATM in Ireland.  This shows actual footage as would be seen by the criminals if they retrieved the camera.

The first part shows the criminal fitting the camera to the ATM.  We then see a number of genuine cardholders using the ATM including some who cover the PIN pad when keying in their all-important 4-digit private number, but then quite a number who do not.  The footage clearly outlines how easy it is for passers-by, or a  hidden micro-camera, to see the 4 digits being keyed in by unsuspecting ATM users.

The industry works hard to keep your card and transactions secure.  You can help too.  The best advice to reduce the risk of your payment card being successfully compromised by criminals is to COVER YOUR PIN when using an ATM or any other payment terminal.