ATM Gas attacks are a problem for Europe - Is the USA next?

In April 2013 information of the first ATM explosive gas attack seen in the UK was posted on this blog.  The European ATM Security Team (EAST) has been reporting statistics for such attacks since 2005, and the chart below shows a significant increase from 2009 to 2013. 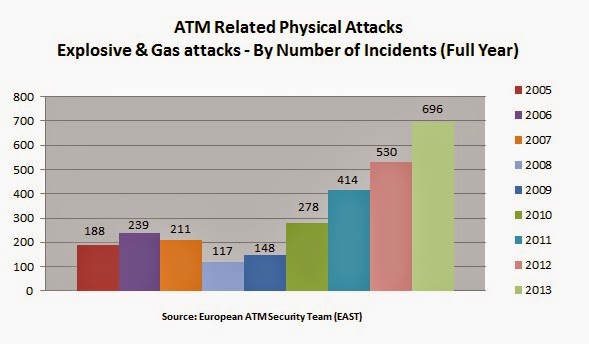 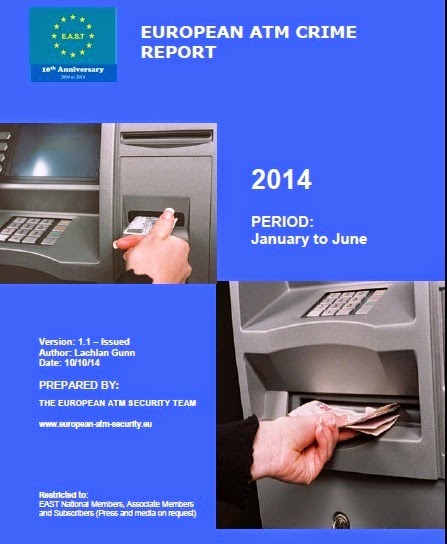 In a European ATM Crime Report covering H1 2014 (January to June) the European ATM Security Team (EAST) reported an estimated 20 incidents of ATM Malware. These were ‘cash out’ or ‘jackpotting’ attacks and all occurred on the same ATM type from a single ATM deployer in one country. While many ATM Malware attacks have been seen over the past few years in Russia, Ukraine and parts of Latin America, this is the first time that such attacks have been reported in Western Europe.

The European ATM Security Team (EAST) has been reporting the usage of insert skimmers at European ATMs for some time now.  In a Fraud update published last month they stated that a new form of mini-skimmer was reported by one country, specially adapted to fit the card reader of one ATM type.  This mini-skimmer, which can be seen in the image to the right,  was used in conjunction with a new style of video camera for PIN compromise.

The European ATM Security Team (EAST) has reported another fall in ATM related card skimming incidents, while card trapping incidents and ATM explosive attacks continue to rise.  A summary of the statistics can be seen in the image below.

The Association of Chartered Certified Accountants (ACCA) in the USA has published a new research report entitled “Skimming the Surface – How Skimmer Fraud Has Become a Global Epidemic”.  The report was produced by Pace University, sponsored by ACCA USA.

During a raid on 17 January 2014, 11 suspects were arrested as they planned to travel to Italy to commit skimming attacks. Among them was the leader of the criminal group as well as the financiers.

For more information read the related Press Release on the Europol website.