According to the European ATM Security Team (EAST) there are now 403,369 ATMs in Europe.  While growth is slowing, the total rose by 1.3% from H1 2010 to H1 2011.  EAST has been keeping these stats since 2005 and the chart below shows overall growth since then.  You can download a country breakdown from the EAST website. 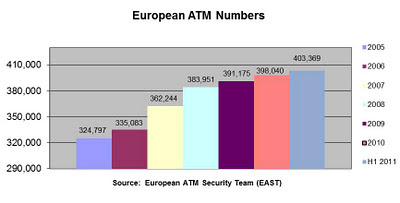 How does this compare to the rest of the world?  While the figures for Canada and Russia are provided by EAST, I have found it harder to find accurate statistics for the rest (without paying).   My best estimates are as follows:
﻿
According to Retail Banking Research (RBR) China, which had 210,000 ATMs at the end of 2009, will have 545,000 ATMs by 2015.  According to the ATMIA ﻿Global ATM Clock there are now 2,321,253 ATMs in the world.  RBR predicts that by 2015 this will have grown to 2.9 million.  ﻿
At the moment Europe is the world's second biggest ATM market.  By 2015 the pictutre will have changed significantly, and the U.S. will have fallen from the top spot.  This must be good news for GRG, the Chinese ATM manufacturer.  I wonder what impact this will have on global ATM fraud?  The good news is that China is moving towards EMV (Chip and PIN).  By 2015, according to China UnionPay, all Chinese cards issued will be EMV cards.  Both Visa and MasterCard have now announced the introduction of an EMV liability shift for the U.S., Visa by 2015 and MasterCard by 2013 but, at the moment, only MasterCard has mentioned ATMs.
If you can provide accurate statistics for ATM numbers in any country, please could you post them in a comment on this blog.
Posted by Lachlan Gunn at 08:26