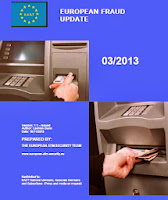 The European ATM Security Team (EAST) has just published its third European Fraud Update for 2013. This is based on country crime updates given by representatives of 19 countries in the Single Euro Payments Area (SEPA), and 3 non-SEPA countries, at the 31st EAST meeting held at Equens SE in Utrecht on 9th October 2013.

Skimming at ATMs was reported by 20 countries, with increases reported by 8 countries and decreases by 6 countries. The usage of fake ATMs for card and PIN compromise has been reported, the first time such a method has been seen by an EAST National Member, and skimming devices placed on ATMs with dip readers appear to be becoming more prevalent.


ATM related skimming losses continue to migrate away from EMV Chip liability shift areas. From January to September 2013 such losses were reported in 38 countries and territories outside of the Single Euro Payments Area (SEPA) and in 6 within SEPA. The USA is still the top location for such losses, followed by Thailand and Colombia. For the first time significant losses are being reported in India. European fraud counter-measures such as geo-blocking, fraud monitoring capabilities and fraud detection continue to improve.

Skimming attacks on other terminal types were reported by 13 countries, and there has been an increase in attacks on unattended payment terminals (UPTs) at petrol stations. A major intercontinental network of card fraudsters that carried out attacks on point of sale (POS) terminals has been dismantled in Canada and Europe through a joint police operation. Operation ‘Spyglass’ has so far resulted in the arrest of 29 people.

Cash trapping incidents were reported by 13 countries, with 3 of them reporting related arrests, and 9 countries reported transaction reversal fraud (TRF) incidents. The usage of the cash claw continues for both types of attack.

The trapping of cards at ATMs was reported by 7 countries. Criminals are also using distraction methods to capture cards, typically targeting elderly people. 6 countries reported such attacks. The criminals observe a genuine transaction, note the PIN, and then distract the cardholder to steal the card.

Ram raids and ATM burglary were reported by 10 countries. 9 countries reported explosive gas attacks and two of them also reported attacks on ATMs using solid explosives. The overall rise in explosive attacks in Europe appears to be continuing, and their impact is growing.

The full European Fraud Update is available for download from the EAST Website by EAST Members and EAST Subscribers.
Posted by Lachlan Gunn at 10:50